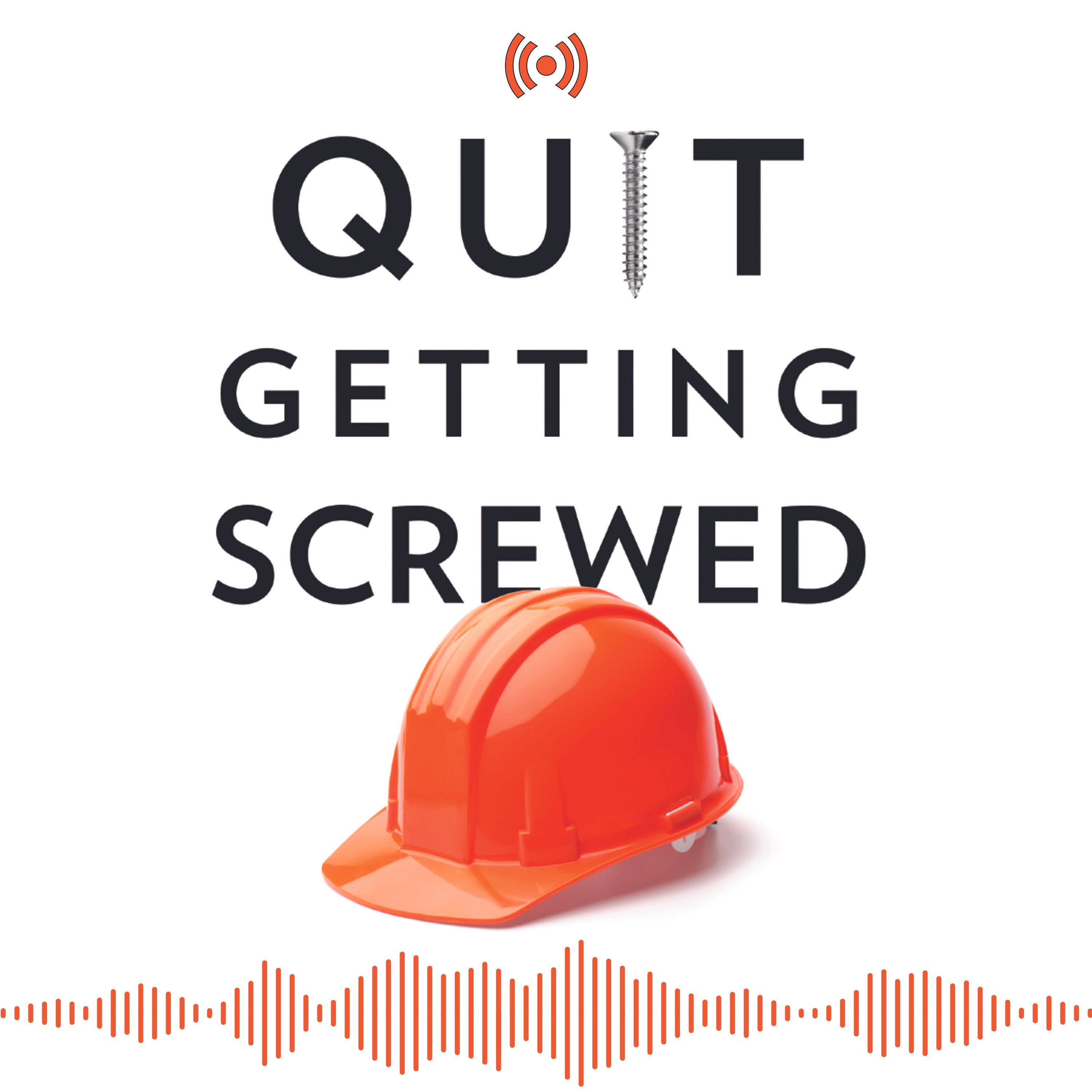 The Quit Getting Screwed Podcast
Episode 44: Build Wealth Through Acquisitions (With JC Maldonado)

It's time for a new podcast episode, and this week's episode is over the ever-engaging topic of Business Acquisition. In the construction industry, buying and selling businesses are incredibly common. However, no one teaches you how to go about it or where to begin when looking to sell your company or buy another one. Fortunately, J.C. Maldonado is an expert on the matter, and this week he is joining Karalynn to tackle this hot topic.
If this episode teaches you anything, consider showing your support by liking it, leaving us a review, and sharing the episode with your peers! Thanks for tuning in!

Quit Getting Screwed was recorded on Riverside. fm and is distributed by Castos.

It’s time for some more Lien Laws! Brian Zimmerman, a Wisconsin construction attorney and lien specialist sits down with Karalynn to crack into what it takes to file a valid lien in Wisconsin. WI has some specific rules and regulations, so Wisconsin contractors must take a moment to master their lien laws.   Wisconsin construction professionals, this episode is a great resource to add to your tool belt! If you find it helpful, be sure to like the episode, follow the podcast, and share it with the other WI contractors in your life! Happy listening!   ___Find Brian's Services Here: https://www.hurtadozimmerman.com/ Connect with Brian: https://www.linkedin.com/in/brian-zimmerman-57227113/  Follow us!Instagram: @cromeenslawfirmpllcFacebook: The Cromeens Law FirmLinkedIn: The Cromeens Law FirmQuit Getting Screwed was recorded on Riverside. fm and is distributed by Castos. ...

HAPPY NEW YEAR, and welcome back to the Quit Getting Screwed podcast! It’s a new year, full of new opportunities, so let’s kick it off with some amazing best-business-practices advice and insight from contractor coach and podcast host of Cabinet Maker Profit System, Dominic Rubino! This episode is jam-packed with some golden nuggets every small contractor should know to launch their business into success and keep it thriving throughout the year, so be sure to tune in! Like, subscribe, and share this episode with your peers who are trying to start the year off the right way.____Find Dominic's Services Here: https://www.dominicrubino.com/ Sign Up for Dominic's Coaching: https://www.bizstratplan.com/ Purchase Dominic's Book:https://www.amazon.com/Construction-Millionaire-Secrets-multimillion-dollar-contracting/dp/1777372909#:~:text=Construction%20Millionaire%20Secrets%3A%20How%20to,9781777372903%3A%20Amazon.com%3A%20Books Listen to Cabinet Maker Profit Systems Podcast: https://cabinetmakerprofitsystem.com/podcast/ Listen to Profit Tool Belt Podcast: https://profittoolbelt.com/podcast-dom/  Follow us! Instagram: @subcontractorinstitute Facebook: The Subcontractor Institute LinkedIn: The Subcontractor Institute Quit Getting Screwed was recorded on Riverside. fm and is distributed by Castos. ...

Episode 42: The Subcontract- A Breakdown (With Caroline Beavers)

New podcast! In this week’s episode, Karalynn is joined by construction attorney, Caroline Beavers, to discuss how the modern subcontract is broken and the best practices to break it down and negotiate it! If you are a subcontractor and tired of getting screwed over by your contracts, tune in and get informed on how YOU can best navigate the modern-day subcontract! The best way to level the playing field is to equip subs with the knowledge and know-how, and this episode does a great job of doing exactly that in a plain-English, easy-to-grasp format.   If you find this episode helpful, consider leaving us a like or review, following the podcast, and sharing it with your community! We appreciate you!__Find Caroline's Services: https://www.facebook.com/chblegal Follow Caroline on Instagram:@chblegal   Follow Caroline on Twitter:@chb_re_co Follow us!Instagram: @cromeenslawfirmpllcFacebook: The Cromeens Law FirmLinkedIn: The Cromeens Law FirmQuit Getting Screwed was recorded on Riverside. fm and is distributed by Castos. ...